Twenty five years ago Tank Girl was ambitiously adapted for the screen by director Rachel Talalay. Restricted by the expectations and fears of the nineties studio system, Tank Girl might not be an ‘accurate’ adaptation of the irreverent RiotGrrl inspired (but male written) source comics, but does that mean that it deserves its reputation as ‘a frenzied mess that’s dull in the extreme’? Rewatching for the first time since I was a teen, it’s an exhilarating watch that constantly bombards the viewer with layered textual references, a perfect nineties soundtrack, and an oft-confusing visual aesthetic that blends comic-book animation with the stylised action sequences and a no f****s given approach to narrative verisimilitude. And then come the occasional oddly traditional shootout fight sequences, which often took me out of the pop cult-ure, pomo, riot grrrl reality that makes up the majority of Tank Girl. 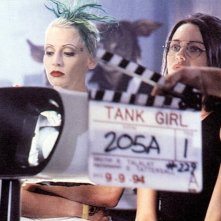 Tank Girl is set in a dystopic, resource-starved Australian desert in 2033. In terms of plot – which frankly isn’t that important (but I’ll give it a go) – it doesn’t rain on Earth anymore after a catastrophic event (comet) that disrupted the weather patterns (ignore the ‘science’), water becomes scarce, valuable, and controlled by an evil corporation called ‘Water & Power’ run by Kesslee (a super campy Malcom McDowell). Our anti-hero Rebecca Buck/Tank Girl (Lori Petty) is an outlaw who scavenges for water and supplies for her commune, until the Water & Power goons find and burn her hideout, kidnap some orphaned kids, and kill her then-boyfriend (he’s fridged – the first of several disruptions to misogynistic comic book tropes). Tank Girl escapes from Kesslee with the help of Jet Girl (Naomi Watts) a W&P jet engineer (#WomenInSTEM) who had all but given up on escaping the company. With the help of military-experiments-gone-wrong animal-human-hybrid ex-soldiers called Rippers (because, of course), Tank and Jet Girl plan to save the children (yeah, I forgot about them too) and take down the corrupt system.

Honestly, this doesn’t cover even half of what happens to the audience in Tank Girl. But the plot really wasn’t that important to me as I whole-heartedly bought into the characters, chaotic world-building, and general tone of the whole experience. This explanation of Tank Girl, posted by director Rachel Talalay, from alternative bi-weekly newspaper Portland Mercury sums it up pretty perfectly:

I think my recent (and probably ongoing) obsession with Birds of Prey (and the Fantabulous Emancipation of One Harley Quinn) (Cathy Yan, 2019) and my current binge on the women-led, women written, directed, and created (from a woman written comic) TV show Vagrant Queen (2020- ) makes me far more open and excited about women-led comic book entertainment and their disruption of the limited expectations. Both Birds of Prey and Vagrant Queen play around with genre and characters that don’t fit into comic book women tropes, their highly choreographed and playfully filmed fight sequences (Vagrant Queen uses bullet time) are part of what make these examples so vibrant and fun.

Violence is not the focus in the majority of Tank Girl’s action sequences. For example, the grisly demise of the movie’s villain Kesslee is shown through an animation and references to The Wizard of Oz’s melting Wicked Witch of the West, as his partially digitised and prosthetic body dies away. But when the film does fall into the more traditional shoot outs – more at home in trad male-led action movies – I did start to lose focus.

Fight scenes are key sites of spectacle and spectacularised masculinity in traditional action movies – think of the bullet time fights in 1999’s The Matrix (now parodied by Vagrant Queen) that dissected the power and control of Neo (Kenau Reeves), or the hard bodied John McClane (Bruce Willis) in Die Hard (1988) where he survives falls, explosions, and shoots outs and almost single-handedly subverts the plans of foreign-terrorists.

Traditionally, women are positioned to the side of the spectacle, but in Tank Girl the titular character is right in the middle of the action, improbably surviving. Yes, both Ellen Ripley (Alien, 1989) and Sarah Connor (Terminator 2, 1991) had been there before – but in very clearly defined narratives fighting for survival not fun. Tank Girl explores the gap between the idea and image of what women are expected to do, and what they actually can do. It exposes the artificiality of gender and patriarchal power structures that surround this both on screen and in society.

Tank Girl’s fights are not really about showcasing physical power, but rather feminine ingenuity and characters unafraid to use their sexuality and the limited expectations their enemies have of them to succeed. The movie actively and perhaps problematically promotes the sexualisation of power, but I would argue that many of anti-feminist stereotypes about women that are presented are used to make satirical points about their absurdity. Tank Girl pseudo-seduces a W&P henchman so she can pull his grenade pins, Tank and Jet kiss to cause a distraction, and there’s a literal song and dance routine in a brothel as part of their surreal rescue plan.

Tank Girl’s parched post-apocalyptic setting, lengthy action sequences, and lead woman character mark it as a funny, feminist forebearer to Mad Max: Fury Road. Even if you’re not sold on the movie, you can’t deny the visual impact that Tank Girl has had on US pop culture. Look at contemporary Riot Grrls like Imperator Furiosa and [the Robbie/Yan] Harley Quinn. Talking of Harley Quinn, or rather Margot Robbie… her production company – LuckyChap Entertainment – have optioned the rights for Tank Girl from MGM. I would be totally sold on a Margot Robbie Tank Girl – especially as it would be more likely get a woman director.

Making Tank Girl in the post-Wonder Woman era (now) would be an entirely different experience to Hollywood in 1994. Watching Gal Gadot’s Wonder Woman battle her way through No Man’s Land (both literally and metaphorically) brought me to tears in the cinema. As the first woman to direct either a Marvel or DC franchise movie, Patty Jenkins had to deal with countless tone-deaf articles that suggested she and Wonder Woman were huge gambles for Warner Brothers. Even after the film proved to be a critical and financial success, reviews and reporting continued to question the wisdom of a woman director. Director Rachel Talalay has spoken out about the misogyny of the industry and the difficulties she experienced in making the Tank Girl she wanted to make – more than twenty years prior to Jenkins’ success. 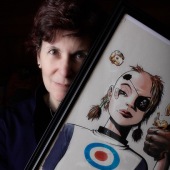 “It’s not a meritocracy. It’s a business, and it’s an art form. If you aren’t talking about it, and you aren’t pushing to give women opportunities, how are they ever going to show that they can do it?” – Rachel Talalay

But Jenkins was levied with the burden of representing not only herself but the hope of every woman filmmaker and future woman-led genre movie projects. Her perceived failure, as with Talalay’s Tank Girl and the Halle Berry-led Catwoman (Pitof, 2004), could have been used to justify not making women-led movies or working with women filmmakers. Jenkins quit as the director of Thor: Dark World saying there were “creative differences”, but has since stated she didn’t want to make a movie she didn’t believe in (it is the least critically well-received Marvel movie), and have its poor reception explained away as the sole fault of its director being a woman.

Talalay did survive what she calls “the dark ages” of the 2000s, post-Catwoman, but did not become the movie directing maven she should have been. Tank Girl was Talalay’s third feature, a follow up to the 1993 Ghost in the Machine (which I’ll be watching at some point as part of the #WomenMakeSF project). Her career is impressive and she has worked on lots of my favourite genre TV shows  over the years, but Tank Girl should not have been the end but the start of Talalay’s movie directing career. Male directors are just allowed to fail in a way that women directors are not.

Is Tank Girl a messy movie? Yes. Is it a messy movie that 1990s Hollywood just wasn’t ready for? Also, yes. I really wish I could see the movie that Talalay had wanted to make. Tank Girl is a revolutionary bit of cinema, just twenty five years ahead of its time.

What to watch next from Rachel Talalay:

Amy Nicholson (2018). Goddesses of the Galaxy: Women Directors Take Over the Blockbuster Universe. The Guardian. 11 May. https://www.theguardian.com/film/2018/may/11/goddesses-of-the-galaxy-women-directors-take-over-the-blockbuster-universe

My Tweets
Join 2,126 other subscribers