Available to stream/rent/buy: widely available and in selected cinemas.

In Neasa Hardiman’s Sea Fever we get a woman scientist, representations of science, science fiction, discussion of science and superstition, and it’s all topped off with a woman director AND writer! It is a bit of a dream movie for this science and screen studies scholar. This, of course, all made me very nervous that I wouldn’t like the film. This was especially highlighted after the director Neasa Hardiman, who has a film studies PhD, kindly responded to my DMs and sent me a video intro for the screening event. Thankfully, I genuinely loved the movie and the way it engaged with all the parts of my research that marvellously converge in Sea Fever. 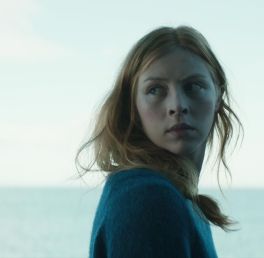 Set in contemporary Ireland (ROI), Sea Fever follows marine-biologist/microbiologist Siobhán (Hermione Corfield- left) who is introduced as an icy and antisocial scientist (she refuses birthday cake – surely she is a monster!). As part of her PhD research on oceanic faunal behavioral patterns Siobhán books a berth on a fishing trawler called Niamh Cinn Óir, expecting to endure a miserable week with its close-knit crew of six: skipper Gerard (Dougray Scott), his wife Freya (Connie Nielsen), ship’s engineer Omid (Ardalan Esmaili), Johnny (Jack Hickey), Ciara (Olwen Fouéré), and Sudi (Elie Bouakaze). The skipper navigates the trawler into an exclusion zone far out into the Atlantic Ocean, eager to illegally increase his catch, but instead the ship and crew become ensnared in the tendrils of an alien/undiscovered creature. The crew become infected and die off one by one after making contact with the creature’s parasitic goo. Siobhán has to gain the trust of the superstitious crew, quarantine the infected, and try to stop the contagion reaching the mainland before all is lost at sea.

Since Jules Verne’s Twenty Thousand Leagues Under the Seas: A World Tour Underwater (1872) there has been a flow of science fiction with a nautical focus. The sea merges myth and science –  both a source of deep fear (and thus myth) and massive rewards (and thus science). It offers a fluid storytelling space that holds many contradictions as it can be local, safe, bountiful, and homely, and/or alien, perilous, barren, and unwelcoming. Its danger and its beauty are often intertwined. Calm waters can hide dangerous undercurrents, and as Verne correctly guessed, a storm raging at the surface of an ocean lies over an eerie calm in the depths.

Women are also a site of superstition at sea, with their hidden depths that are beyond male experience. Siobhán is red-headed and identified as an omen on the ship as soon as she boards. The trawler is named for Niamh Cinn-Óir – the flaxen haired Irish folklore character who comes to Ireland from the sea on a white steed, and falls in love with and takes her lover Oisín to the otherworldly realm of Tír na nÓg (Land of Youth). He returns to Ireland, with the promise to Niamh not to touch the land. But of course he does; so he ages and dies, never to see Niamh again. Always follow the women’s instructions on avoiding sudden death (see also: Ripley in Alien and Siobhán in Sea Fever).

Maritime myths have been used to help people understand seafaring tragedies – people are lost at sea, their bodies never recovered, and so warnings are woven into myths that make the sea a creature to be tamed and feared. Mermaids, the Kraken, Davy Jones’ locker… Stories about the sea are an early form of maritime science communication as sailors (and their wives) pass on their wisdom through fiction, thus explaining ‘science’ (knowledge) in a memorable and accurate/believable way (as understood at the time).

My favourite scene in Sea Fever is a conversation between Freya and Siobhán as they watch the blue glow of the ocean. Whereas Siobhán marvels at the wonder of science and identifies the glow as bioluminescent phytoplankton, Freya sees the golden glowing hair of Niamh and recalls the Irish myth that the trawler is named for. Rather than a moment of conflict between science and myth (faith/religion) there is a calm acknowledgement of each other’s perspective and the acceptance of beauty regardless of its source or reason. The sea is a space that can be explained by both science and storytelling as we imagine futures, explore the oceanic frontier, and try to understand what can be explained and what cannot.

Sea Fever makes reference to and was repeatedly linked in our live tweet to other stories of unknown depth and creatures such as Jaws, The Thing, and The Abyss, all of which see characters underestimating the sea and its hidden depths and creatures. For the crew of the Niamh Cinn-Óir, the calm of the glowing sea soon shifts as the trawler strays into the exclusion zone and the grasp of a huge and unknown sea creature. After blue goo (don’t lick the science!) starts to enter the ship, Siobhán, as the only person on board who can dive (see: sailors who don’t swim), discovers that the hull of the ship is surrounded by glowing tendrils of a deep-sea creature that remains unseen and whose scale is unknown.

But the creature and its creepy Upside-Down-Demogorgon-style tentacles infect the gorgeous underwater photography, recalling the ethereality of Mikael Salomon’s underwater photography in The Abyss (note similarities in the promotional images with the backlit diver) and the Cousteau-esque beauty achieved in Évolution. Beauty and danger (beasts), and myth and science are closely entwined throughout Sea Fever. In stories where mythical creatures like mermaids are the cause of shipwrecks, storms, and drownings as they lure men to their deaths, their beauty is what makes them particularly deadly.

It is impossible not to connect Sea Fever to the current pandemic and how its use of quarantine and isolation are so central to the characters’ experiences. Despite the visual power and vast presence of (parts of) the creature in the underwater sequences the real danger is microscopic and unseen. The mysterious blue goo oozing into the ship and its water system is full of parasitic larvae that infects human hosts, driving them to madness and death.

The intentionally groan-worthy romance plotline that emerges early on – a classic way to make a woman scientist character easier for audiences (she must be a sister, mother, or lover) – is soon cast aside after Siobhán’s male love interest dies. We don’t remember his name, and we’re not supposed to. It’s Siobhán and sea beastie’s story. Her attempts to quarantine and save the remaining members of the crew is not a motherly action – but rather one of ‘science’ with her concern being isolating the infection from the mainland. Notably she does not see the creature as a monster; it is an animal that belongs there, the ship is out of its depths and invading its space. Perhaps the exclusion area is not just in place to protect fish stocks…

There are so many contemporary narratives that can be read into Neasa Hardiman’s debut feature film Sea Fever. It’s an eco-fiction (is this a consequence of the anthropocene? Have changed sea temperatures and ecology led this creature to the surface?), it’s horror, and it’s science fiction. But instead of saving humanity we are left with a young woman scientist essentially donating her body to the creature (rather than science). She sacrifices herself and hopefully stops the infection reaching Ireland, but she also doesn’t want the creature to suffer.

Although Sea Fever deserves to be seen at the cinema – it’s so beautiful – the global pandemic gives the film an eerie relevance. A relevance that I hope gets people to rent or buy (or both in my case – nerd alert) Sea Fever – an indie production that has been released straight to VOD while big budget movies can hide in their shells.

As the saying goes, I feel all at sea at the moment. But, hey, at least I’m not on that boat.

Well, that was fantastic. Don’t want to post spoilers, but everyone should rent/buy #SeaFever by @NeasaHardiman. Great film, agentic women, and not-shitty men. #WomenMakeSF

What to watch next from Neasa Hardiman:
This is Hardiman‘s first feature film, but she has directed episodes on major shows including: Jessica Jones; Inhumans; Z: The Beginning of Everything; and popular British drama Happy Valley

Interview with Neasa Hardiman about Sea Fever and Sailor Superstitions for Hey You Guys https://www.youtube.com/watch?v=gt7O4rHz_Pw