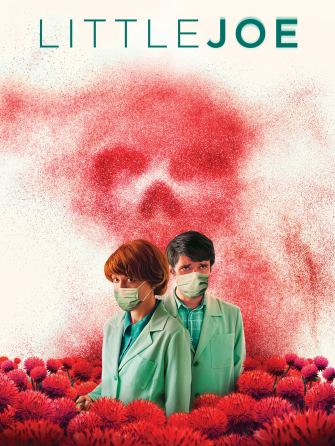 The growing #WomenMakeSF movie watch list is a broad one with major mainstream action SF to indie arthouse SF. Jessica Hausner’s Little Joe is definitely the latter. It is an evocative mood piece like Évolution, but it has a clear(ish) narrative, unlike Évolution. These arthouse SFs provoke feelings and discussion rather than offering the excitement and narrative clarity of a more mainstream SF action adventure. Indeed, the lack of closure in films like Little Joe is both a frustration and something I actually rather enjoy (sorry, Lyle [Lyle’s response: It’s not the lack of closure I mind – it’s the lazy frakking writing just to be “arty”. Plenty of things lack closure but are still good stories.] – that’s me told).

Horticultural horror science fiction Little Joe follows single mother and workaholic scientist Alice Woodard (Emily Beecham). Alice is employed as a part of a team of botanists on a top-secret project to genetically engineer a plant that will release a microbial scent that will make people happy. Her colleague Bella (Kerry Fox) has an at-work support dog called Bello who starts behaving oddly following contact with the plant’s pollen (he can’t wear the PPE); claiming it is no longer her Bello she has him euthanised (the unnecessary animal death was not a great start to this movie). Alice starts breaking the project’s rules and expedites the plant’s development. She takes (steals) one of the plants to give to and name after her human child Joe (Kit Connor), but Alice begins to see her own child’s behaviour slowly alter. He seems happy, but is it a performance? People who come into contact with the plants are just a little bit off, like a Stepford wife or a pod person from Invasion of the Bodysnatchers (a key reference point for the filmmaker). This little red spiky plant is having an effect on people, but what kind of effect?

Little Joe could be read as an antidepressant metaphor – a moral panic over the use of psychiatric drugs to treat depression (read: unhappiness), seen as a quick route to wellbeing without having to do the work. But does the film actually critique Western reliance on pharmaceuticals? I think Little Joe does comment on our current cultural obsession with chasing idealised versions of personal wellbeing (with the elusive and individual notion of happiness as a goal), but I think it is far more critical of the state and companies that ‘sell’ it and use it to sell us things, rather than the individual per se (both medic and patient).

Little Joe is about a top-secret developmental lab, and in the film’s eerie conclusion (it plateaus rather than peaks) we learn that the plant will be distributed as part of government and NHS initiative to classrooms and offices across the UK (and there are hints at wide-scale international interest). But those who inhale Little Joe’s pollen aren’t happy; they are instead placid, flat, and devoted to proliferating the spread of Little Joe’s effect. The film presents the emptiness that many depressives describe when explaining what depression feels like – an incapacity to feel, an internal emptiness, often leading to a carefully curated façade of happiness (smiling depression).

Little Joe aims to make its audience uncomfortable, from the unnecessary euthanasia of a support animal (Bello, Bella’s dog) to the moments of human interaction (awkward British dating and divorced parents discussing their child) to the aggressive and affective soundtrack.

The soundtrack is taken from the score for Watermill (1972) by the late Japanese composer Teiji Ito (1935-1982). Watermill was written as a score for New York Ballet in 1971, which is described as “a meditative work that explores the transformative nature of time”. As Jerome Robbins, the choreographer, notes: “the score of Watermill stems mainly from the religious and theatrical music of Asia… [and] the majority of these musical-religious works are contemplative evocations of nature and the seasons.” Although I haven’t found evidence of Hausner referencing the heritage of the soundtrack, I think that its roots in narratives of nature, time, and devotion are relevant.

The high pitched drones, disembodied dog barks (I imagine this is particularly disquieting in cinema surround sound), and airplane sounds are all part of Ito’s original Watermill. Sounds from across time and nature, with airplane recordings clashing against bamboo flutes (used in the 13th century by Zen Buddhist priests) are what drew Jessica Hausner to the work. She acquired the rights for this unique score, so when storyboarding the film Hausner already knew what the sound design would be like. As the writer/director explains: “some of the scenes are really designed to go with that music. The music is also very strange, it adds to the colors of the strangeness of the situation which is also what I liked about it”.

Hausner’s holistic filmmaking approach makes every element of the film a contributor to Little Joe’s themes of artificiality, nature and time, and dismantling the cult[ure] of happiness. The gorgeous colour palette and costuming makes distinguishing between what is natural and unnatural a challenge and an aesthetic pleasure. For example, the women who speak with (plain-clothed) red-haired Alice wear bold floral prints made of synthetic fabrics and artistic impressions of natural flora. It highlights her disconnection from other people in her home life, but also her connection to the natural in her work life.

Alice’s psychotherapist, most notably, is bright and floral in her attire surrounded by a lush velvet furnished office, but her delivery is stern and (professionally) detached. To attain happiness (if that is the purpose of treatment) – doing the work – there is a need for emotional detachment, a person who is not invested in or initially not part of your life outside of their office. But in Little Joe, Alice’s most developed relationship is with her therapist – the other people are subject to awkward delivery: things unsaid and emotions unexpressed. It’s all terribly British.

The Western world is caught up in a culture of happiness. But it is a relatively late addition to our ideas of a fulfilling worthwhile existence. It’s an almost impossible goal that was introduced in the 18th century Enlightenment. But it’s a slippery term: what is happy? Why do we want it all the time? Are we ‘less than’ if and when we can’t manage that state of apparent completeness? It’s that question of emotion that has been central to so many dystopian cold-future fictions including Brave New World, THX 1138 (1971), Blade Runner (especially in Philip K. Dick’s novel), Equilibrium (2002) and The Matrix (1999).

As my #WomenMakeSFPod co-host Lyle says when she‘s not convinced by a movie: “well, that happened”. Little Joe happens to you and at you. I’m not sure if that made me happy but it did make me think.