Even with the spectacularly WTF ending and the fact that I can’t explain what happened there, I really enjoyed Paradise Hills and it holds up to repeat viewings. It’s an original concept movie, which is hard to get funding for and even more so for a woman making her debut as a feature film maker.

Paradise Hills opens with an opulent wedding and a stunning overhead kaleidoscopic shot of high-end fashion future-bridal-look Uma (Emma Roberts). Guests comment on the apparent socialite’s improved attitude, and her new husband Son (Arnaud Valois) remarks on her obedience. Flashback to two months earlier and a delightfully scruffy Uma wakes up on the island of Paradise – a facility where high-class wealthy families send their wayward daughters to become perfect versions of themselves. Uma befriends her roommates Chloe (Danielle Macdonald) and Yu (Awkwafina), and is betrayed by/crushes on/is saved by pop star Amarna (Eiza González).

All of the women have been sent to Paradise Hills to correct perceived un-feminine deficiencies such as fatness (Chloe), rejecting tradition (Yu), queerness (Amarna – they bury their gay), and disobedience (Uma refuses her mother-approved groom Son, who is somehow responsible for her father’s death). Uma begins to adjust to the strict yet seemingly innocuous routine of Paradise Hills with its lady-appropriate activities, micro-meals, and teacups of mystery milk. The girls undergo Clockwork Orange-inspired behavioural therapy where they are strapped to a carousel horse, precariously hoisted into the air, and forced to watch footage of what their lives should be (positive reinforcement) or what they should want to forget (aversion therapy) – for Uma it’s either rose-waving Son enacting scenes from cheesy rom-coms or traumatic images related to her father’s death. 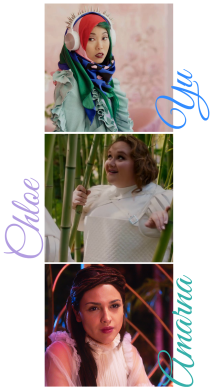 Amarna ‘graduates’ early from the facility and gifts Uma a hidden rowboat and the knowledge that the milk contains a powerful sedative. Uma observes the night activities of the facility – after she spits out her milk – where girls are taken away for, we assume, further adjustment. Uma, Chloe and Yu (rescued from her final ‘treatment’: euthanasia) decide/manage to escape. But discover a control room where they learn that their therapy has not been to rehabilitate them, but to replicate them. Each woman has a replicant – a woman from the lower classes who has sold herself to the facility, undergone extensive surgeries, and studied the women so they can become the physically and mentally obedient girls their families desire.

Then comes the last sequence. Yu dies of her injuries and Chloe and Uma make their way through a cave overgrown with vines where they find the bodies of former Paradise girls including Amarna. Then BAM!:

Not convinced on the massive tonal shift at the end. GOTHIC VAMPIRE FLOWER MONSTER #WomenMakeSF

Iddy biddy tonal shift: Chloe and Uma also discover that The Duchess (Milla Jovovich) who oversees the facility (Aunt Lydia-style) is a gothic, vampire, part-Triffid, cannibal, flower monster woman with some telepathic abilities. Huh? What? Why? Chloe gets entwined in the vine and killed, replicant-Uma (named Ana) distracts The Duchess so that real-Uma can stab her with a scalpel, and they escape together in Amarna’s rowboat. Ana has nothing to go back to, so the Umas hatch a plan to kill Son, give real-Uma her freedom, and make replicant-Uma/Ana a rich widow.

The ending here is possibly layered with intended meaning concerning women internalising patriarchal ideas and consuming (literally here) the advances made by other women, but it is just such a heavy-handed departure from the aesthetic SF dystopia that Paradise Hills presents up to that point. These are also ideas that have already been woven into the film. Is the entire facility a production line for The Duchess’s specialised diet? I don’t know and I don’t really care. From now on I choose to ignore that 5 minute foray into full farce fantasy. Skip from ‘Chloe and Uma make their way through a cave’ to killing The Duchess to ‘the Umas hatch a plan’. Still works.

BUT the production design and costuming is sumptuous and meticulous. A movie can make up for a lot of failings for me if the production design is on point. As we’ve discussed in the podcast, I like visual world building in SF – Blade Runner (1982) isn’t easy to follow plotwise (especially on your first watch), but it looks so good and generates lots of ideas; it’s an experience and a game. High Rise split opinion when I saw it with friends, those of us totally buying into the gorgeous world of the movie and those trying to cling to a narrative thread. Sometimes you just have to go with it, and enjoy the visual pleasures as they come.

In Paradise Hills the mise-en-scène is a mix of future, past, and present fashions in both attire and architecture, with a multitude of intertextual references. The costuming is a little bit Wonderland Red Queen (paint the roses red), a little bit Elizabethan (ruffs! puff sleeves!), a little bit Regency era, a little bit Vivienne Westwood punk bondage chic.

The fashion and style is part of the fabric of Paradise Hills. Visually, it reminds me of the past/present/future design of Ben Wheatley‘s adaptation of High Rise (2015) and specifically the walled garden penthouse of the Architect (Jeremy Irons), his aristocracy-obsessed wife (Keeley Hawes), and their horse. I can also see references to Blade Runner in obvious ways (replicants) but also in the use of past fashions filtered through a contemporary lens. Similarly, the design of the world here in Paradise is essential, the plot however is somewhat  secondary.

Like the painted roses in the Red Queen’s garden, the Paradise girls have had their natural uniqueness painted over to make them palatable to other people’s expectations and desires. The individuating elements of fashion are removed and all of the women at this enforced finishing school are dressed identically. But rather than the practical costuming of control in A Handmaid’s Tale, or even the bland blend-in uniformed dystopias of THX1138 (1971), 1984 (1984) GATTACA (1997), and Equals (2015), the Paradise girls are coiffed, corseted, and trapped in the trappings of femininity. Like paper dolls they’re roughly cut out of their lives, placed in a controlled environment – the dollhouse is simultaneously closed and exposed – and played with until their personalities are captured and they are discarded.

Alice Waddington has worked her way up to directing as a fashion photographer, camera department intern, assistant editor, and costume designer. And it shows: her visual depth of design makes every shot a delicious puzzle (an excessive scenography). We regularly happen upon Milla Jovavich just hanging out mid-Vogue shoot (surely, Annie Lebowitz is just out of shot) in her lavish couture dresses and bonnets. She is the woman who rises to power in the patriarchy, internalises it, benefits from it, and enacts her frustrations on other women who have refused to play their part within the system. The casting of Jovavich aligns with Waddington’s pre-production pitch that teased an intended gamer girl audience. From the playful/able Leeloo in Fifth Element (1997) to the replayable Alice from the Resident Evil franchise (2002-2016), Jovavich is a supermodel action movie icon whose contemporary stardom is rooted in SF video game adaptations and films that have been adapted into games.

Alice Waddington sold her movie to the investors with the untapped and often forgotten woman gamer market as a potential audience, and a meticulously planned out storyworld with a design built around existing architectural spaces in Spain and the Canary Islands. She also promised to create her vision within a confined budget. What she achieves is a visual feast, while imperfect in its delivery, the effort and attention to detail must be applauded.

My Tweets
Join 2,098 other followers